Back to all posts

We just received a fantastic review of our album in the latest issue of Progression magazine. Check it out...


"This debut album from Seattle's Storm Chronicles is surprisingly rich and mature for an opening statement.  At first listen, you'd assume David Burr (keyboards/guitars/drums/bass/vocals/samples) and Jody Dietz (vocals) have been playing together forever.  And you'd be almost right.  Although the two only have been performing together since 2011, the music on Looking Backward has been in development nearly two decades (which partly explains the title).  The result is a satisfying blend of symphonic progressive rock, ambient atmospherics and melodic pop.

Burr cut his teeth musically playing in various cover bands before conceiving, writing and producing this album, and those influences shine through here. Tracks a la "Ghost Writer," "Corners" and "Individual" sound like Alan Parsons' best work from the 1970s, while the two-part title track evokes Rush's 2112.  Throughout this album, Dietz's wide-ranging powerhouse voice negotiates Burr's multifaceted compositions like a Coast Guard searchlight on the raging sea.

It will be interesting to see what these two do for an encore, as their obvious command of melody is a rare gift indeed." 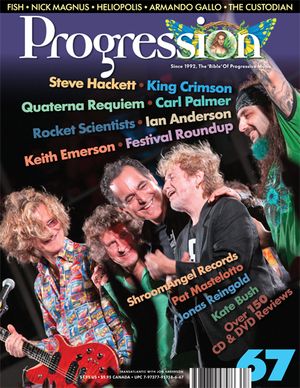 Big thanks to Nick Tate for the great review and Publisher John Collinge for the exposure. We were blown away by the kind words about our music.

Copies of the latest issue (#67) of Progression can be ordered at: progressionmagazine.com. Wonderful articles and coverage of the progressive rock world. Highly-recommended reading.

And our album can be purchased here on our music page.